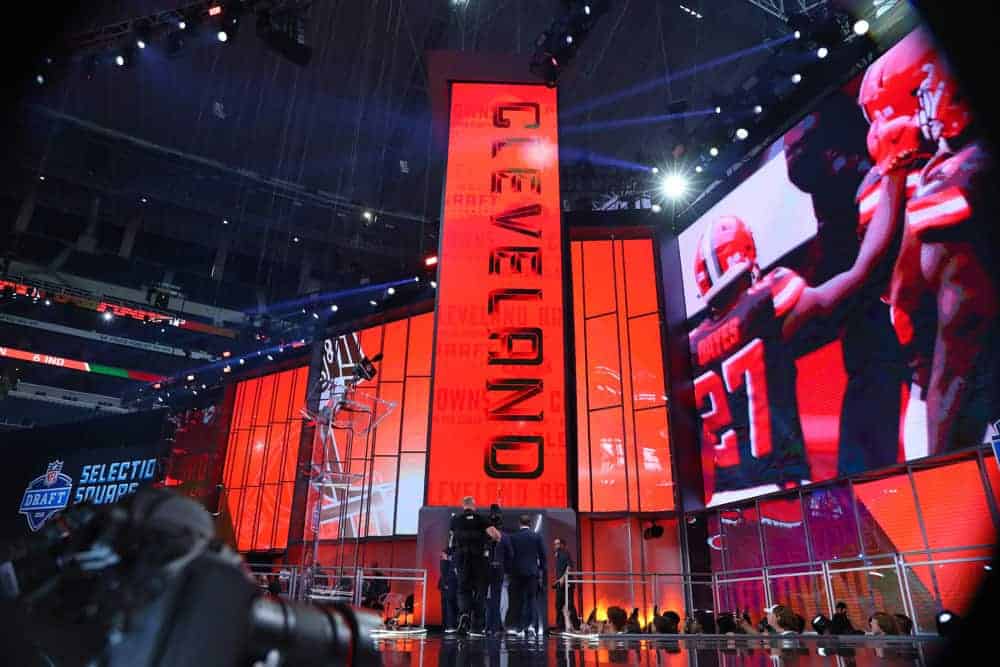 With the 2022 NFL draft officially four days away, the Cleveland Browns are almost on the clock.

Well, not quite “almost.”

Without a first-rounder this year, Cleveland will have to wait until day two for Commissioner Goodell to announce the pick to Browns nation.

Despite not having a first-rounder, the team does possess seven picks, a decent size to bring young talent and potential to the team.

And at this point, one would expect Berry, Stefanski & Co. to have a few positions and players ready to go come Friday night.

Here’s a look at which positions the team might be targeting:

Once upon a time, the Browns’ wide receiver room was the toast of the town.

When Odell Beckham, Jr. was brought in from the Giants in 2019, there was an expectation that his partnership with Jarvis Landry would provide one of the league’s strongest one-two punches.

According to some, it was a video game-esque addition.

After trading with the #Giants for Odell Beckham the #Browns essentially have a team you’d build on Madden now.

Needless to say, that didn’t happen.

This offseason, the team managed to add Amari Cooper, who will no doubt bolster the receiver room.

But Cleveland should look to target another wideout in the draft.

For starters, this draft features a fairly strong receiver class.

While it lacks a can’t-miss star like last year’s Ja’Marr Chase or DeVonta Smith, there are a half-dozen or so quality starters.

And while USC’s Drake London, OSU’s Garrett Wilson and Chris Olave will likely be off the board by pick 44, the team could target Georgia’s George Pickens or Penn State’s Jahan Dotson with a day two pick.

The latter was even mocked by CBS Sports’ Ryan Wilson.

Then there’s the fact that receivers have become a hallmark of championship winning teams.

Last season, the runners-up Bengals trotted out a corps of Chase, Tee Higgins, and Tyler Boyd.

The Rams relied on wideout and part-time superhero Cooper Kupp in their quest to the Super Bowl.

Amari Cooper is a great start; the team should look to bring in one more weapon.

This isn’t a knock on Myles Garrett.

The former first-rounder is an elite pass-rusher.

But he can’t be expected to shoulder the burden himself.

With Jadaveon Clowney and Takkarist McKinley still exploring free agency, the Browns should look at adding depth to the defensive front.

Just like a receiver, strong play along the defensive line has become a marker of the most competitive teams.

The former of those was instrumental in the Rams’ pursuit of the Lombardi Trophy.

Garrett is on that level, and adding a few more pieces could unleash his talent to an even greater degree.

And who knows, maybe Clowney will return, anyway?

Berry wouldn’t tell us if there was still interest in Landry or Clowney.

Myles Garrett has reached out to No. 90 during the off-season, trying to lure him back.

Kickers have more or less become the Jason-Bourne-on-cable NFL equivalent.

If you look hard and long enough, you’ll probably find one somewhere.

And no, they shouldn’t pull a 2016 Bucs and take a kicker in the second round.

While the Browns did re-sign Chase McLaughlin, that shouldn’t be the end of the search for a kicker.

Last season, McLaughlin converted less than 72% of kicks last season, 23rd in the league among kickers who played at least 16 games.

A reliable kicker provides more than relief and security in close games; they provide wins.

Look across the division to rookie Evan McPherson, the Bengals’ rookie phenom who was instrumental in their run to the Super Bowl last season.

The Browns could give themselves a major boost by finding a consistent book on special teams.

Betting Odds Show A Tough Season Ahead For The Browns

David Njoku Is Working With The Best At His Position