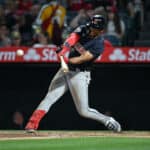 On just his second big league pitch, Guardians OF Richie Palacios slapped a single into left field. Later on, in the fifth inning, Palacios did himself one better, reaching base on a double. And if that wasn’t storybook enough, it came while his parents were being interviewed in the … END_OF_DOCUMENT_TOKEN_TO_BE_REPLACED