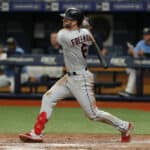 The Cleveland Indians are beginning to make moves every day that will eventually result in the Opening Day roster. Earlier this week it was letting veteran outfielder Billy Hamilton know he won't make the team. The moves continued Friday and a trade was even made. https://twitter.com/tribeinsider/status/1370427228278820864 Plenty of Indians fans will be … END_OF_DOCUMENT_TOKEN_TO_BE_REPLACED