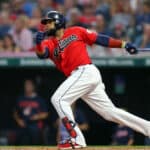 According to ESPN's Jeff Passon, Cleveland Indians Free-agent Carlos Santana has reached a 2-year deal with the Kansas City Royals according to reports. https://twitter.com/JeffPassan/status/1336387003575840771 According to Passon, the deal is for $17.5 million over 2-years. The contract also includes performance bonuses such as becoming an All-Star or … END_OF_DOCUMENT_TOKEN_TO_BE_REPLACED