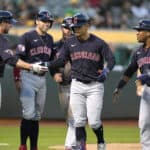 At the trade deadline, the Guardians faced a choice. Do they go all in with this young core, mashing the "buy buy buy" button and cashing in their young studs for proven vets? Or do they continue evaluating their young talent and loaded farm system in preparation to compete for years to come? Ultimately, the Guardians chose option number two. And so far, … END_OF_DOCUMENT_TOKEN_TO_BE_REPLACED 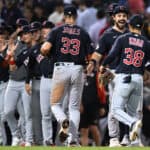 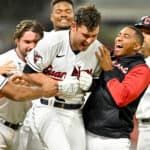 With the Guardians' win over the Tigers on Thursday, a few things happened. First, the club got its fifth straight win, tying a season-high matched twice, once in mid-June and once in mid-July. Second, the team officially swept the Tigers, which marks their first sweep since the All-Star Break. Since the midseason classic, though, the Guardians have yet to … END_OF_DOCUMENT_TOKEN_TO_BE_REPLACED 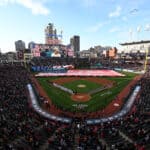 The Guardians are once again in first place in the AL Central. You read that correctly. In addition, they now have the best odds in the AL Central of making the postseason at 61%, according to 538. Perhaps that's a recognition (finally) that this team, while young, is special. And no matter how average they look or how much they struggle in fits and … END_OF_DOCUMENT_TOKEN_TO_BE_REPLACED 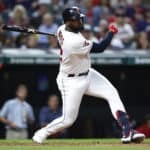 Exactly one calendar year ago, Guardians DH Franmil Reyes smacked a single hit in Cleveland's 1-2 loss to the Tigers. At the time, Reyes was batting .274, which was close to his season apex, and sported a .908 OPS. But by far the most important number to Reyes' standing in Cleveland was 30 -- the number of homers he drove in during the 2021 season. Reyes was … END_OF_DOCUMENT_TOKEN_TO_BE_REPLACED